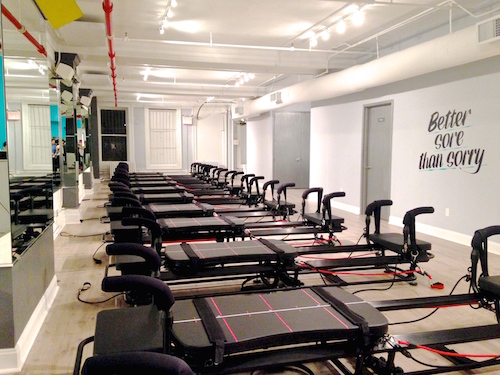 Cardio, Strength Training, and Pilates walk into a bar…

Let’s skip to the punchline; they have a baby and call it SLT. If you saw SLT and your mind went straight to a SLuT joke, then you have a dirty mind. But, you may also be the exact type of person they want taking their class, since we’re pretty sure we’ve seen that emblazoned on a few of their retail tanks and tees. After all, the studio attributes its very existence and method to some culmination of cardinal fitness sin.

And trust, the workout itself is plenty fucked up, too, in the best ways possible. The entire class takes place on the “Megaformer” — this machine with three platforms, and lots of bands and straps, which could easily be mistaken for a S&M machine. But for real, our frenemy, the Megaformer, in its body-sculpting glory, is brilliant. Precise yet versatile, the Megaformer facilitates smooth, silky movements, driving our muscles to total exhaustion, yet offering a sense of control at all times. It’s really unlike any other piece of gym equipment we’ve encountered, and access to your very own (for 50 minutes) is a huge draw that really does make the $40 session feel more palatable.

Throughout class, our trainer instructed us to change certain springs on our Megaformer (these control the resistance) as we worked different muscle groups; namely ass/legs, core, and upper body. These quick transitions were not the easiest to keep up with during our first couple of classes; they happen FAST. We started some of exercises a few counts late, which may or may not mean we have uneven butt cheeks (greatest fear in life). We eventually got the hang of it, though.

The exercises, too, take some getting used. Our instructors cued a couple where we could take an educated guess on the corresponding movement, like Squats (somehow substantially more painful/soreness-inducing on the Megaformer), or even Elevator Lunges. But Mermaid, Scrambled Eggs, French Twist, Spider Kicks, Catfish, and more had us looking around blankly (or maybe with utter terror) to figure out what the f*ck we should be doing. We lucked out that our first class wasn’t jam packed, and our instructor was able to demonstrate all of the above on her own machine. We also did a lot of looking around and copying what others with sick physiques were doing, so kudos to instructors who contentiously put newbies in between SLT regulars for this purpose. We definitely appreciate the effort behind the upper body section of this class; it’s smart, creative, distinct from what you’d do in a sans Megaformer workout. But really, the arm burn is just gravy. Butt/legs and core are the meat and potatoes, and the real reason we shell out and show up. The Megaformer allows you to lunge like you’ve never lunged before, and we think if we did this class 3-4 times per week, our legs would look mega-toned and our core would look mega-chiseled. After all the planks, pikes, oblique twists, french twists, teasers and wheelbarrows we struggled through, we think we saw an ab, and emerged triumphant.

A word on some trials and tribulations. While the class is small and we did get some hands on corrections, we definitely felt uncertain of our form at times. While the workout itself is low-intensity and supposed to be stress-free on joints, we did feel from time to time that we might be using the wrong muscle or something (like our hip flexors towards the end of core work), which it was tricky to flag or clarify when class is moving at such a rapid pace. Ultimately, we’re a big fan of Cardio, Strength Training and Pilates’s spawn, SLT, and would probably marry the Megaformer just to spend more time with it and on it, if that was legal.

Gonna Cost You
$40, but we think it’s worth noting that the class is semi-private. With only 10-12 machines (and therefore clients) per class, you’re getting more attention than you would in most boutique fitness classes that pack in 30-50 bodies. Also, water is available for the reasonable price of $1.

Instructor Vibe
There are definitely some standout SLT trainers; class with Bethany Meyers was our favorite so far, we’ve heard great things about Amanda Rey, and SLT founder Amanda Freeman still teaches from time to time. That said, the method and the machine above all else really drive the class, more so than some other types of workouts, like bootcamp or cycling, where instructor vibe and personalty feels pretty much paramount.

Studio Sitch
SLT amenities are a somewhat bare bones (especially for the price). But, we just remind ourselves that we’re there to Strengthen, Lengthen, Tone, and can find our spa treatments elsewhere. There’s only two bathrooms/changing rooms at here, equipped with face wash, Shobha freshening clothes and standard deodorant fare.