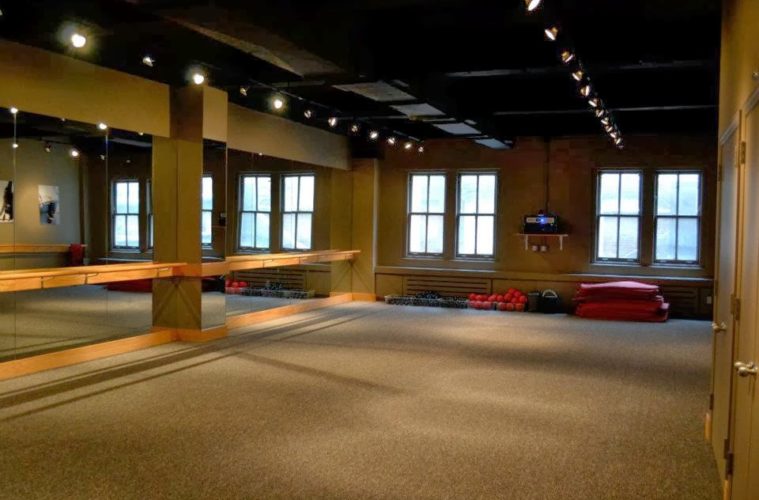 Before we share our overall impression of Pure Barre, let us preface this by stating that we’re a big fan of workouts that attract regulars. Why? Well, for one, we see the very existence of studio loyalists as a telltale sign that the fitness experience is one worth frequenting. And two, we count on regulars (who usually know what the hell they’re doing) to lead the way when our instructor isn’t visible for whatever reason. And yet, exhibiting a level of uniformity that’s a real trip for a newcomer, Pure Barre feels sort of like Stepford. It’s not that everyone looks the same, or is decked out in the same Pure Barre gear. Rather, it’s that everyone breathed the same, marched the same, C-curved the same, tucked the same and shook the same (yeah that’s right, shaking; it’s like the crown jewel of hard work here, with our instructor encouraging us to embrace our “shake zone,” which sounded a lot more like an earthquake situation we’d want to avoid than a sensation we’d welcome in our legs). And ultimately, this was a case where the cult-like situation impacted our ability to get the most out of class, because there just wasn’t enough in the way of welcoming vibes or thorough explanations.

When our instructor strolled in 30-seconds before go-time (we guess you could call this punctual, but it felt like a late entrance to us) and assumed her spot at the front of the room, the entire class sprung up into a standing position, snapping their arms up to chest height, one hand folded on top of the other, like a barre army at attention. On the very first beat of the first song, everyone began lifting their knees in a perfectly timed march, except for us, that is (in fairness, we found the music to be very muted, but also outdated, so we weren’t exactly complaining). We caught on to each move quickly enough, but we were consistently a count (or few) behind, when out of nowhere the rest of the group began incorporating abrupt arms movements, synchronized exhales, and then seamlessly transitioned onto their backs for for ab exercises (we will say our abs were warm as f*ck by the time we ended the warm-up with a 90-second plank sequence and moved on to the arms section), leaving us in the dust.

The arms section, along with each subsequent thigh, seat and abs sequence, was comprised of lots of controlled movements and small squeezes, with several “changes” per muscle group (Pure Barre speak for transitioning to a slightly different movement in the same exercise family to burn the sh*t out of that part of the bod). While we’re on the subject of vernacular, if you can get familiar with the terms straighten, lengthen, bend/stretch, lift, pulse, shake and tuck, you’re pretty much set for the majority of the workout. That said, although we were able to follow our instructor’s cues and demonstrations, it wasn’t totally clear why we were doing what we were doing half the time, which is problematic in a workout like barre that requires a real mind-body connection. For example, one seat exercise entailed wrapping our arms around both ourselves and the barre in a way that felt completely contorted. We weren’t sure how this unnatural position enhanced the effectiveness of the glutes move, and our instructor didn’t offer up an explanation. More pervasively, throughout class we did all of the (hip) tucking; tucking left, tucking right, tucking while on the ground in a bridge, and finally in our C-curve (the classic barre position for ab work, heavily favored at PB). Our instructor committed the same crime of omission here, failing to mention what the tucking was all about, which seems sort of heinous considering its prevalence in the experience.

So, we have a working theory that the omnipresence of regulars bit us newcomers in the ass at Pure Barre (first time for everything, right?). We think it’s possible that our instructor skipped the chore of comprehensive explanations because she assumed everyone in the room already knew why we were tucking and shaking and pulsing and such. But we didn’t know, and we would have gotten over Pure Barre’s Stepford vibe if it didn’t ripple over and affect the quality of our workout, which we suspect it did.

Gonna Cost You
$34/class, which ain’t cheap, so don’t add insult to injury by forgetting socks and needing to buy pair of toesox (we know how to spell; these are a thing) for $15 at the studio. You have a solid shot at booking on Class Pass, particularly on the weekends, so we’d recommend that as your entry point.

Instructor Vibe
Our instructor knew the names of lots of people in class (read: regulars), and shared individual encouragement frequently, which is always nice. We also got a couple of hands-on corrections, which was great, but would have been even better with a quick comment on what we were doing wrong to help us avoid repeat offenses in the future (here’s to hoping muscle memory kicks in?).

Studio Sitch
No showers (though with the real estate occupied by their Pure Barre retail set-up, we sort of wonder what they were thinking in terms of space allocation), but there are a couple of changing rooms with face wipes, deodorant and dry shampoo.