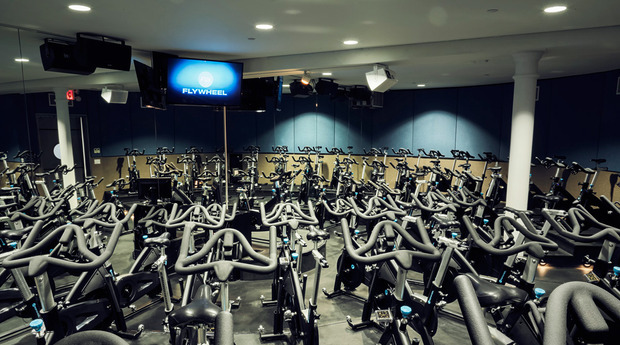 You know that road-cycling junkie friend who judges you hard for the amount of time you spend riding “around” on a stationary bike? Yeah, us too. Well, in the event that you get tired of him giving you grief, drag him along to a Flywheel class, and we think that will be the last time he questions your humanity for spending 45-minutes (and your cold hard cash) spinning in a dark room when you swap weekend recaps. Because Flywheel is an athlete’s workout: competitive and metrics-driven, taking place inside a stadium (complete with “Torqboards” displaying which riders are leading in class), after which we could see an Olympic arena being modeled, if indoor cycling were ever to be crowned with such an honor (Summer Games 2040? Winter Games 2042? Dare to dream!).

But before we rattle anyone with Flywheel’s promise of fierce opposition (and good news, you can opt out of that leaderboard situation), we should add that the studio pulls off the approachable vibe just as well as it crushes the competitive one. From front desk friendliness, to proactive bike set-up assistance (from our instructor, no less), we think Flywheel offers one of the more easily navigated, early-in-the-game spin experiences out there. Sure, Flywheel’s metrics focus serves as a draw for the competitors of the world (both those looking to take on others, and themselves); but actually, we think Flywheel’s measured method benefits first-timers, too, if you can avoid psyching yourself out about how you’re stacking up against others. It didn’t take us long to get a handle on Torq (resistance), RPMs (speed) and Power (how hard you’re working overall), and having those reference points definitely kept us accountable throughout class, and in the right ballpark on resistance and speed for flat roads and climbs (yeah, apparently those should feel very different).

Even the baseline ranges our instructor called out throughout class were tough, but the intervals were straight-up relentless. Interval training is all the rage (yes, short bursts that leave you panting are brutally exhausting, but science says they are the sh*t, and we can’t argue with that), and Flywheel takes that to heart (read: to the bike). The 45-minute ride is packed with intervals of various lengths (holy 60-second push), at different levels of resistance, culminating in “races” where we went abandoned that whole “It’s a marathon, not a sprint,” mentality, and went HAM for up to a minute, with our power for that single interval, versus the rest of the class, displayed up on the Torqboard.

While all of these speed and resistance checks were helpful, the class does revolve mostly around the numbers, which we found to have a ripple effect in a few different areas. First, because so much of the experience hinges on the tech, it’s sort of disastrous when you end up on a f*cked up bike. On one occasion at Flywheel UWS, our bike was calibrated incorrectly, and the amount of resistance on the bike was way heavier than what our Torq number suggested (it was like a race where we were trying to trudge through snow when everyone around us was gliding through air). Short of summoning hulk-like strength (fail), there was no way for us to hit solid power numbers, and the mismatch made it tricky to follow the ranges our instructor called out. On a more persona note, we’ve also felt as though the tech aspect can impact the instructor dynamics of a ride, too, in that their vibe is a bit muted. Whereas other cycling classes can pivot on an instructor’s energy and connection, we’ve felt some Flywheel instructors fall back on the method as a crutch, since it is so strong, not really giving riders that extra electricity that makes a fitness experience unforgettable and unique.

All in, whenever we’re in the mood for a little friendly competition and a killer sweat, Flywheel is a very reliable bet, and one we return to when we’re looking to dominate a cardio session. Sure, there are some days our total power score falls short (did someone say, “hangover ride”?), which can be frustrating, but there’s something to be said for having a measured, trackable personal best that we can aim to top every time we saddle up.

Gonna Cost You
$34/class with some membership options that probably make sense for the truly addicted. Cycling shoes and water are free, as is the fruit, which we appreciate mucho.

Instructor Vibe
Because Flywheel is so method-driven (after a couple of classes, we recognized some classic torque/RPM combos, plus a number of races, and some emphasis on current and total power numbers in every class), we’ve found that most instructors deliver a pretty solid experience, but haven’t come across many with major star power, and it’s the ride itself that keeps us coming back.

Studio Sitch
Flywheel UWS isn’t the biggest (‘Wheel flies solo here; no accompanying FlyBarre studio of which to speak) or the most tricked out (as a word to the wise for those who have visited Flywheel UES or Flatiron), but still offers a boutique experience by any stretch of the imagination. There are lockers, a couple of showers, bathrooms, couches on which to collapse after your ride, and products to help you get cleaned up. Except facial cleanser. There’s no facial cleanser. And we can’t figure out what’s up with that. (What’s up with that, Flywheel?)