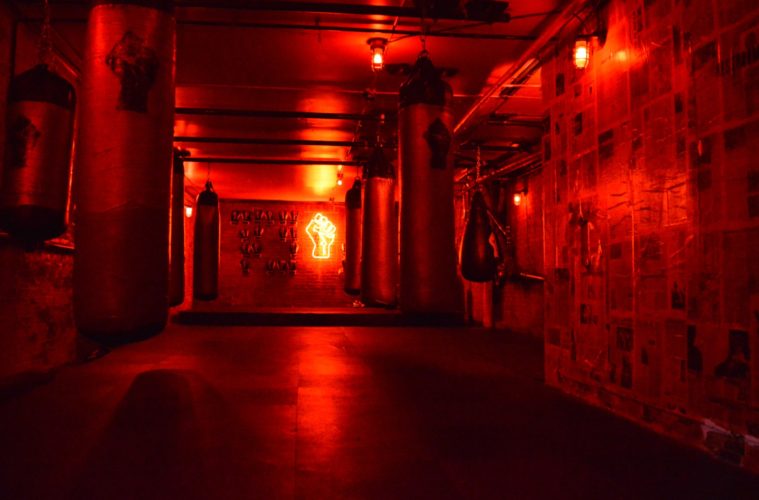 Once in a while, you’ve just got to give in to the grunge. Sometimes that means spending 48 hours straight in your pajamas without showering, six Seamless deliveries deep, and on a Netflix binge that would give The Fat Jewish a run for his money. Sometimes that means powering through a rainy turn at your favorite music festival when the going gets muddy (circa two too many Governors Balls in recent memory). And sometimes that means reveling in a fitness experience despite it being a little sordid, a lot crowded (may the claustrophobic be warned), and very sweaty. Nowhere is that more true than at Overthrow, where boxing in a dimly lit, mirrorless basement and super close quarters never felt so right.

Overthrow’s gritty vibe also somehow excuses the laissez faire attitude of the front desk, which is usually a turn-off for us, especially when we’re trying a new studio. But it’s almost as though we can’t imagine a world in which check-in at Overthrow would include a useful rundown on things like: equipment needed (wraps, bring ’em or buy ’em; gloves are provided); the fact that spots down in the oubliette (read: sub-level classroom) are first come, first served (pick a fist, any fist); the locker rooms are upstairs behind doors that are graffitied, half-knocked-in, and felt somewhat precarious to enter (it’s the look, guys; we felt much better after crossing the threshold and seeing bougie face cleanser by the sink, lo and behold).

Whereas the greeting situation at Overthrow felt hands off, our instructor was all over us from the minute class started; in dark a room packed with bodies, he somehow managed to instill in us the fear that if we were slacking off, he would find us, and he would kill us (or maybe just call us out for sleeping on his watch). After a (new-boxer-friendly) rundown on proper boxing stance, basic punches, and a memorably awesome (and tough as hell) warm-up of shadowboxing interspersed with jump squats, high knees and the likes, our instructor barked at us to partner up and get on our gloves. Before heavy bag work (pretty standard combos here since we were on our own; and sharing a single bag with 1-2 other people), we dove into a couple of drills with our partner.We hit some punch combos standing (jab-jab-cross or alternating hooks, tapping gloves each time; it took serious focus not to space out and jab when our partner was crossing), broken up by sets of mountain climbers, push-ups, or forearm plank variations. But the drill that rocked us the hardest (maybe because it followed the first of our two turns at “two-on-one” pad work with our instructor) was an endless sit-up exercise where we locked feet or ankles with our partner and then jab-crossed at the top of each full sit-up.

One thing that surprised at Overthrow was the amount of partner work, which constituted the vast majority of the class (and no forewarning on this whole package deal situation). Considering the amount of partner coordination and pacing required, we lucked out that the first person in our line of vision happened to be in fairly comparable shape, so neither of us slowed down the other (instead, we worked harder to avoid being the weak link in our duo). In the future, we would make a concerted effort to find someone operating at a similar fitness level to prevent any cramping of style or killing of vibes. And we think it would have made sense for our instructor to call this out, since we could see this matchup (or mis-matchup) dictating the overall experience. Well, that, and getting down with the grunge. Ultimately, you’ll shower off Overthrow’s charming grime (seriously, still questioning how this is a thing), but the endorphins and afterburn (post-exercise calorie burn for the win) from this workout will stick with you for hours, to be supplanted by soreness that will last several days.

Instructor Vibe
From what we can tell, the instructors are all about tough love at Overthrow. In our opinion, there’s a time and place for a blunt approach, and it works just fine for us here.

Studio Sitch
Overall, Overthrow feels unpolished in a good way. But at the same time, it wouldn’t feel quite so good if there weren’t showers and and Malin + Goetz products to help with clean-up post class. Towels are provided, but handy plastic bags for dirty, drenched clothing are nowhere to be found, so BYO unless you want that sh*t floating around in your bag (you don’t).