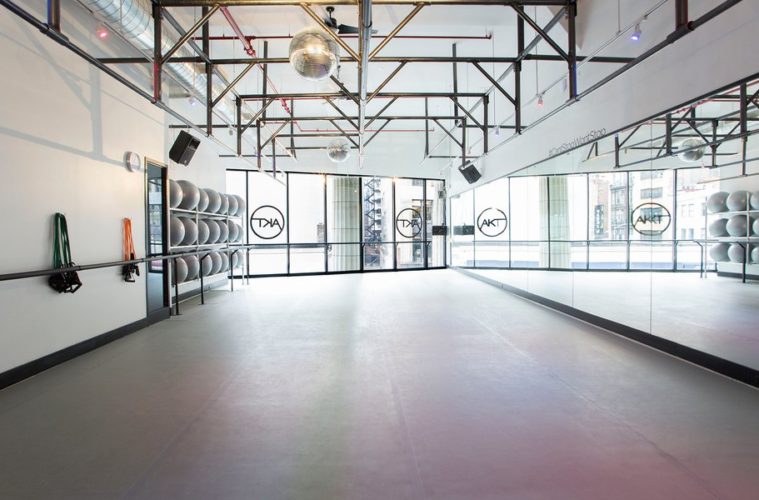 When we think of dance class in NYC, we typically envision one of two experiences: a bona fide ass-whooping at a studio where real, live, aspiring dancers play, which promises some degree of humiliation and envy; or, a dance-inspired workout that too closely resembles our Nana’s Zumba class, which, bless her heart, keeps her looking svelte as f*ck over 70, but doesn’t quite do it for us. AKT bypasses both of these polarizing camps, somehow striking an approachable balance between flitting and frolicking in a choreographed fashion, and fitness.

Outside of the fact that class attendance was 99% female (hey, we can see this being a draw or a deterrent for those reading), the first thing we noticed when we walked into AKT’s “Factory” studio (the biggest of three classrooms at the Nomad location) was a screen displaying a bunch of metrics, which looked a lot less customary here than the disco ball a few feet away. Turns out, AKT uses a technology to sync up with any heart-rate monitors in the room, and that dashboard displays to how hard you’re working throughout class, if you’re wearing one. We weren’t, but between the jumping and bouncing and hopping prevalent in AKT’s choreography, we had to guesstimate that our sh*t would be in the red zone, predominantly.

After a warm-up of dynamic stretches, our instructor led us through a series of cardio dance intervals, interspersed with toning segments, which hit arms, ass and abs (gang’s all here!). Somewhere between the planks, the arm exercises with 5-pound weights, and the table-top glutes work, we managed to catch our breath, which is positive, because there were no “scheduled” rests during the 60-minute workout. What was less familiar territory for us was the AKT choreography. Each of the cardio dance bursts were connected, starting out with a few of AKT’s signature dance steps (think jumping and hip swinging and fist waving) and adding on to the routine with new moves throughout class, until we had mastered (ok, learned, and if our instructor hadn’t been doing the routine directly in front of us the entire time, that might be a stretch too) the whole shebang.

Among the everyman dancers of AKT, we’re not shy about our flailing limbs and tendency to screw up the choreography (this one’s a mental workout, too, people). That said, their signature dance class does require some semblance of coordination and/or rhythm, however basic. So if you tend to dodge dance floors universally, we’d advise sticking with AKT’s (dance-free) HIIT or toning classes to avoid feeling like a deer caught in the headlights (we’ve actually witnessed someone freeze and just stare blankly at the mirror until that dancing section of class ended). But for us, dancing at AKT is sort of like dancing at a wedding; sure, there are some generally accepted principles by which to abide (i.e. don’t Jersey Turnpike on the bride or groom, unless you’re the bride or groom), but no one’s judging you for having a good time with it.

Gonna Cost You
At a rate of $37/class, we would not have been too disappointed if AKT had disappointed. But it didn’t. It’s cool; we’ll just need to space out our visits to avoid draining our children’s college funds.

Instructor Vibe
While you do not have to be a dancer to enjoy AKT, you do have to be a professional (current or former) to instruct there, not to mention friendly and energetic, bordering on bubbly, if our experiences were at all telling.

Studio Sitch
AKT Nomad is outfitted with 3 showers and an array of fancy products (and lockers down the hall), which has been totally sufficient for our purposes on each visit, but we could see getting somewhat cramped if there was more than one class in session at a time.