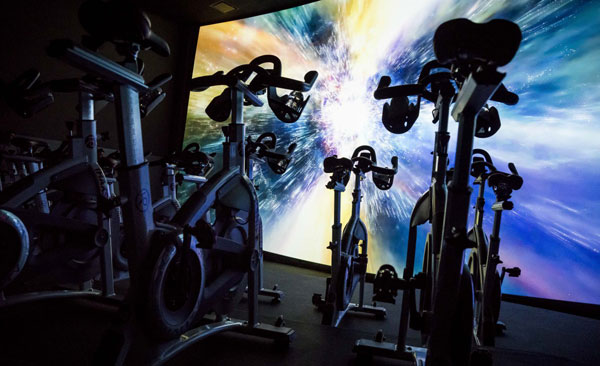 We can’t say enough good things about the power of visualization. We visualize all kinds of things: abs, pizza, winning lottery tickets, the list goes on (it’s called manifesting, people). Well now visualize this: a cycling stadium set inside of a movie theater, essentially, with a massive IMAX screen portraying incredible visuals and a f*cking amazing sound system. Congrats, you just conjured a pretty accurate image of IMAXShift, and it’s every bit as awesome as you’re envisaging.

Hand in hand with IMAXShift’s obvious singularity (you know, jogging through outer space, racing over snowy cliffs, exploring digital worlds; that kind of thing) comes another departure from the conventional cycling scenario: no mirror (actually, there’s no arm series, either, which is atypical, but since this exclusion neither delighted nor bothered us, we’ll just leave it at that). Surprisingly, the lack of a mirror, maybe as much as the presence of a massive screen, transformed the experience as a whole. Our inability to see others in class, beyond those in our immediate periphery, made the ride way more individual (we basically felt like we were the first and only man on the moon, and it didn’t feel too lonely up there, especially with our instructor stepping in as mission control to guide the way) than other cycling situations, where you’re probably either competing against, or attempting perfect synchronization with, everyone else in the class. Nope, not here. Just us and the open road; and by open road we mean the Amazonian jungle or the inside of a black hole.

We will say, the reflection-free setup made the choreography (tap backs and crunches, mostly) feel somewhat out of place; if you can’t see that you’re synced up with the crew, are you really tapping it back at all? Maybe we would feel differently if the flat roads, hills, sprints and heavy pushes, layered with the unreal imagery, hadn’t kept us engaged, but the intervals in this class are no joke and kept us plenty occupied. The other thing that didn’t quite click for us was the tech aspect of the ride (though getting an email summary of our calories burned and such a few minutes after class ended definitely helped keep us accountable for our next ride; and helped us quantify how many margaritas at Gran Electrica down the block we’d earned). Maybe it’s because the rest of the IMAXShift experience – the visuals, the sound, the feeling of feelings – is just so big and epic, but the metrics aspect felt like a bit of an afterthought to us.

Ultimately, we thought this was a fitness experience truly unlike any other, and well worth the trip (and for some, the trek) to Dumbo; so much so that we can see adding it to our (slim as f*ck) list of “worthy-of-a-subway-ride-on-a-ninety-degree-day” studios. We all know the feeling of being in the thick of a workout, when we’re super focused on our form, or staring down the hot rider next to us in the mirror, or actually blinded by a bead of sweat trickling into our eye, it can be hard to get out of your head and visualize much of anything at all. And that’s why IMAXShift is sort of magical. Whether we were sprinting our face off or climbing our very own Goliath of a hill, the visuals are f*cking incredible (definitely live up to the IMAX hype), and a welcome distraction from our burning legs and lungs.

Gonna Cost You
$34/class, which includes shoes but no agua. There are also some packages, like $375 for monthly unlimited, that feel reasonable as far as boutique fitness memberships are concerned. Too early to tell if ClassPass is in IMAXShift’s future, but no dice for now.

Instructor Vibe
We wouldn’t saying IMAXShift instructors play second fiddle to the sick visuals, but there’s definitely a different dynamic here versus in other cycling classes where the instructor is always front and center, and therefore is the focal point of the ride more often than not. We would guess there is probably an art to instructing with the added element of an IMAX screen, and from what we can tell the instructors here strike a solid balance between commanding attention and letting the IMAX experience speak for itself. IMAXShift was not our first rodeo taking class with Jesse or Bree (ex-Flywheel), and they’re both masterful in every way in this setting, too (there are only a handful of instructors on the schedule, so sue us for starting with what familiar faces when we knew we’d likely be exploring foreign lands and galaxies).

Studio Sitch
Lots of showers, lockers, products, quest bars (but no movie popcorn, sorry guys). There’s also a bunch of futuristic, backless couches outside of the stadium (stadium? theater?) that are configured somewhat randomly, and we’d like this to be considered a formal request to have them switched out for reclining movie theater chairs.