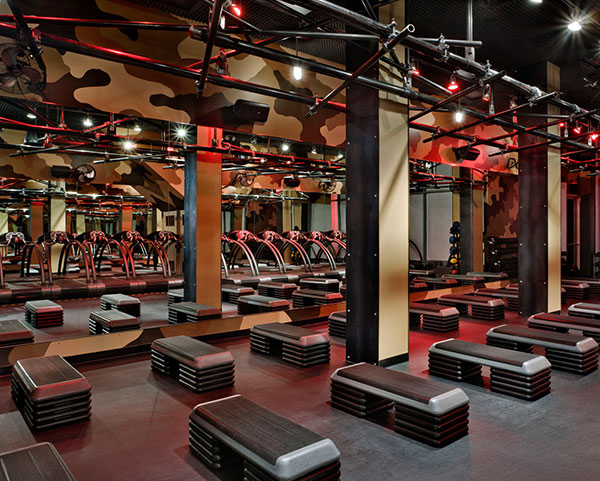 When we first heard the name Barry’s Bootcamp, we envisioned a muddy, outdoor workout, led by an angry drill sergeant named Barry. No such luck (or really good luck?). While Barry’s never fails to bring the intensity, the class takes place indoors (in a studio with wall-to wall mirrors, we might add), utilizes cushy, high-tech treadmills, and it turns out Barry is more the nice, encouraging type. In fact, the Barry’s experience is so urbane, they’ve managed to open 5 outposts in good old Europe, on top of 15 locations across the US.

The combination of legit cardio and real strength work makes Barry’s a unique and supremely killer experience. We spent half of the 60-minute class on the treadmill running intervals, and half on the “floor.” If it sounds simple, it’s not. There can be over 40 people in a single session; with half the class starting on the treadmill, and half starting on the floor. We weren’t sure what we were doing when we signed up for class, but apparently we had selected a treadmill spot (T = treadmill starting spot; F = floor starting spot; this is gospel) so we kicked things off on the running machine.

We started off in a jog, and things quickly went nuclear. Giving us a range for speed on each, our instructor cued runs, sprints, recoveries, more jogs, more runs on an incline, more jogs, more sprints. The people in this room have a no-joke need for speed. One of our neighbors was sprinting at 12.5 mph (we’ve been known to drive slower), which is apparently standard procedure; it’s even commemorated on a bunch of Barry’s tank tops. 10 mph sprints (we were pretty proud to hit that) and all, we had never felt this motivated on a treadmill in our lives, and somehow enjoyed running with that kind of precision and instruction immensely. #Endorphins.

After about 10-15 minutes, our trainer cued us to “switch,” meaning we came down off the tread (gasping for air and chugging water) to find our assigned bench on the floor, while the remainder of the class hopped up on their corresponding treadmill (referring back to that T and F assignment). Typically, each class has 2-3 switches like this, so we ended up doing 2-3 rounds of cardio, 2-3 rounds of strength. On the floor, our instructor called out a bunch of combinations utilizing medium and heavy (and body) weight. Think lots of lifting, pressing, rowing, squatting, lunging, crunching, mountain climbing, planking, and sweating profusely. At times, it was hard to find our instructor demonstrating (did we mention the room fits 44 people?), so we followed the most capable-looking person around us, and that seemed to work out ok, since we didn’t look like idiots, we didn’t die, and we were sore as f*ck the next couple of days.

This is one studio where we wish we had received a better rundown on the format and flow of the workout. We don’t ask for a lot of hand holding (at least not enough to make anyone uncomfortable), but even a smidgen of pandering would have made our first class way less stressful. We weren’t sure if we were in the right spot, or transitioning at the right time; on top of the actual (challenging) exercises, it was a lot to digest. For example, at Barry’s you always stand to the left of your bench (when you’re not on top of it), or the bootcamper to your right might go angry drill sergeant on your ass. We get it, our instructor was busy managing a massive class, but even a quick rundown from the front desk might have gone a long way; we had to sign our lives away on a little waiver, a brief prep on the ass-kicking ahead seems like a fair trade.

We’ll admit, when we saw the “1,000 Calorie Workout” boast on the Barry’s Bootcamp website, we were skeptical. But walking out of BBC TriBeCa out we were singing a different tune, and let’s just say we feel a lot better about that Rubirosa pizza and bottle of red we took down later that night.

Gonna Cost You
$34/class in New York. Water is extra, and you’re gonna need it. Prices vary nationally, though we think the only place steeper than NYC is the Hamptons, where you’ll have to shell out an extra $4.

Instructor Vibe
Overall, Barry’s instructors are high energy, high intensity trainers. We generally feel like we’re in great hands regardless of whose class we visit, but we’d highly recommend Rebecca Kennedy’s class if you can snag a spot; she’s as seasoned and thoughtful (there’s a worthy reason behind every challenging move she cues) as it gets.

Studio Sitch
Barry’s TriBeCa is – how should we put this – dilapidated, particularly in comparison to some of the other BBC locations. Rest assured, the weights are weights, and the treadmills work just fine, but the locker rooms (and lockers, for that matter; we’d say that 50% of them don’t lock successfully) leave much to be desired. In contrast to the Malin + Goetz products on hand, the showers are dingy and poorly lit, which is really only relevant if you need to do a major clean-up post class (standard fare deodorant and hair dryers on hand will help finish the job). Speaking of which, with so many bootcampers per session, showers are kind of a mob scene after prime time morning classes, so if at all possible to head out and pull your sh*t together at home, that would be our recommendation.