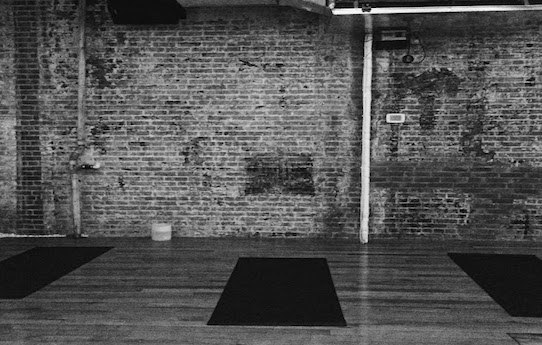 Hip-hop fans that we are, when we got wind of a yoga studio that refers to its community as “A Tribe Called Sweat,” and lives by the motto “We Flow Hard,” we were intrigued. And on our first visit to Y7’s Flatiron location, when we rounded the final corner of our 4-floor ascent and saw “Started From The Bottom Now You’re Here” etched on that last flight of stairs, we pretty much lost our sh*t. Come on, that’s better than @DrakeOnCake.

Y7 Yoga is the coolest yoga studio we’ve come across, period. But the actual workout is no throwaway. We left each session feeling stronger and revitalized, body and mind. If you like beats, dripping in sweat, and you’d rather flow hard than soft, we can’t imagine a more ideal version of yoga. And we guess enough people agree, as Y7 has grown its footprint from a single Williamsburg studio to 5 locations in NYC and 1 in Los Angeles in the past two years.

Lights are already way down when you enter the studio; we never knew daylight candlelight was a thing – but it is, and it works, especially because the room is hot as hell, about 80-90 degrees, and we were slightly embarrassed when we started to sweat immediately. We managed to find a spot for our mats, took a cue from others around us, and chilled out on our mats until our instructor made herself known, popped on some Biggie, and asked the class to assume a comfortable seated position.

The next 5-10 minutes felt similar to other vinyasa yoga classes we’ve taken, only with way better music. We were instructed to link our breathe to our movement (seriously, maybe we’re asthmatic, but we do not find this to be easy), warm up the spine in Cat-Cow (you know, rounding and arching your back), flow through a few Downward Dogs, Planks, Upward Dogs. All of this felt somewhat standard.

Then we started to flow hard(er). Our instructor led us through a sequence of warrior poses, chair poses (little known fact: “Utkatasana” is just a chair pose that feels a lot like a narrow squat), side planks, crow (we balanced on our elbows for about 5 seconds before crumpling into a ball), and god knows what else. After flowing through a couple of rounds of the same sequence together, picking up some speed as we went along, we were told it was time to flow on our own (to be fair, we did get some warning at the beginning of class that this was coming). That was cool, since we could move at our own pace, and skip any pose that we found ridiculously uncomfortable (that’s kosher here). The downside to this solo action is that if you’re lost, it’s hard to follow the clearly competent yogis in the room, since everyone is somewhat doing their own thing.

There was some more complicated stuff towards the end of class that we couldn’t do, like headstands (though we did pull off a shoulder stand), so we were pretty happy when our instructor cued “Shavasana” (corpse pose), and we made like a corpse and chilled the f*ck out. Somewhere between the beats, the breathing, and the athletic flowing, we found we had cleared out heads and done our bodies a favor; we felt looser, longer, calmer. Damn, we need to get our Y7 on more often.

Gonna Cost You
$25, plus $2 to rent a yoga mat at the studio if you don’t BYO, and $3 for a skidless towel, which we added on begrudgingly, but for which we graciously thanked the heavens above as soon as we started dripping sweat everywhere. Heads up, they only accept credit cards.

Instructor Vibes
You can tell that all of the Y7 instructors drink the studio’s Kool-Aid, and care about providing Y7’s particular flavor of yoga. Chloe Mackenzie was probably the instructor who was best at getting us “out of our heads” for the whole hour, and Stephanie LaSpina has a powerful presence that sort of rubs off on you and makes you feel like you’re on top of the world, or at least that 4 story building in Flatiron.

Studio Sitch
No showers, which is fairly typical for a yoga studio. There are however two bathrooms, plus a “pull your shit together” station with mirrors, face wipes, deodorant, and dry shampoo.