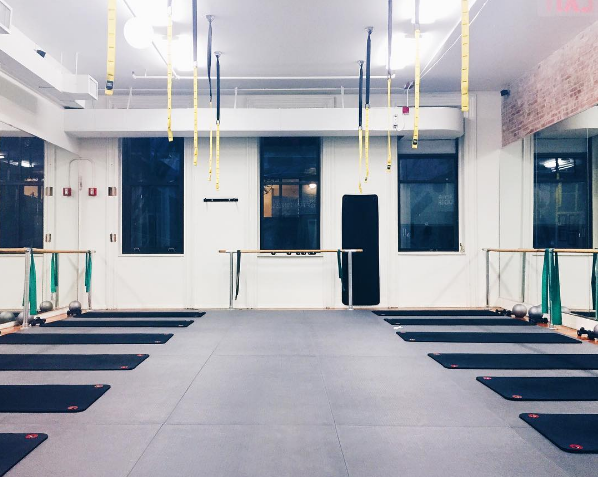 Once in a while, a new variation of something known and loved comes along and just changes the game. Take truffle fries, for example. Who doesn’t crave the flavor, texture, and creativity of this decorated version of a tried and true classic? Yeah, us too. And If you’re wondering what any of this has to do with FlexBarre, the answer is everything. Because we’re prepared to say that FlexBarre is the truffle fries of barre methods. At its core, Flex resembles most barre classes, in that the workout targets arms, legs, ass, and abs. But Flex raises the bar (welp) to another, cardio-sculpting level, incorporating inventive toning exercises at a pace that jacked up our heart rate (based on our state during the stretch, you’d think we had just hopped off of a spin bike), but still delivered on the subsequent soreness of an A++ strength workout. Seriously, we considered investing in a Life Alert button thing before signing up for our next session because it was that hard to get up the next day.

Then there’s the fact that Flex instructors are as bomb as the workout itself, embodying the principle that good things come in small packages, or in this case, Flexbarre-toned physiques (seeing is believing, people). Each of our trainers began class by asking who was new to Flexbarre (followed by an explanation of what muscles we’d hit and why), warned that the impending 55-minutes of sculpting might move “quickly” at times (yes, yes it did), and it was 0 to 100 real quick from there. As promised, we crushed our arms with push-ups, tricep dips, and light weight work, destroyed our thighs with squats (one of many exercises that went nuclear in tempo) and a few more exercises that offered a twist on standard moves at the barre. Ab work (we won’t deceive you by suggesting that abs are confined to a single section of class; expect your core to be in on all the action. All of it.) brought up the rear of the workout, complete with resistance band assisted crunches and oblique twists, mountain and side climbers, and a killer plank sequence to bring it home.

For us, the ass section of class was like a microchasm of Flex’s overall approach. The first couple of glutes exercises were actually pretty aerobic, rather than taking to the barre or floor for leg lifts that keep things pretty stationary, which we’d call the norm for most barre workouts. Holding hand weights, we tore through some lunges with sneak core engagement, drawing our knee up to our elbow for a oblique crunch when curtsey lunging, or straight into our chest for a crunch crunch when back lunging. Speeding up that knee-into-chest motion while keeping our weight on the working leg, we burned out pretty much every leg and glute muscle imaginable, and were feeling all the things in our abs, too. From there, despite a very real level of ass exhaustion, we got into leg lifts and tiny circles (of hell) at the barre with the added challenge of a resistance band, followed by a weighted leg lifts in a table-top position on the floor, and finally capped off with “barre burpees” (moving through our lunges into a plank and back again in rapid succession; this one’s a b*tch). We nearly collapsed at this point at the very though of having to repeat the whole damn sequence on our other side.

Look, we’re not suggesting anyone get crazy and abandon all the OG barre classes out there (or straight up french fries, for that matter). But there’s something to be said for amping up a classic to give it some more edge. And Flex is the studio we choose off the menu of barre options in NYC when we want to f*cking go for it. So if you’re looking for a chill, slow-moving class, look elsewhere. To that end, we could see this class being a bit overwhelming for a someone just getting back on the fitness bandwagon, or completely new to working out, but if you can rally for the challenge, Flex delivers a rare combination of instructor gems and a golden method.

Gonna Cost You
$38/class, which is steeper than most barre classes, but there are savings to be had when you buy in bulk. We’ve had success with Flexbarre classes on ClassPass, and it feels like hitting the jackpot every time.

Instructor Vibe
Those lean muscles wouldn’t mean much without the accompanying energy, encouragement and masterful control of the class. Luckily, Flex instructors deliver on all of the above and really elevate the overall experience.

Studio Sitch
Flex Union Square is home to a barre studio, a pilates classroom, and a personal training space to boot. There are plenty of lockers to secure your sh*t, and a pair of bathrooms, but no showers of which to speak.