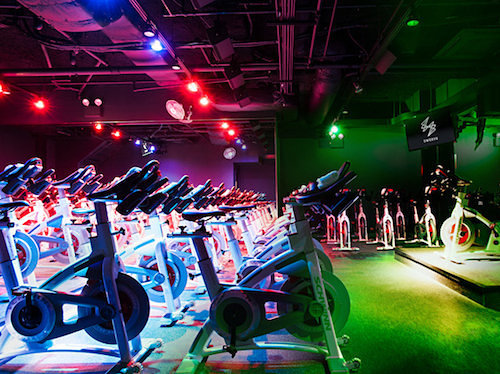 These days, people join teams all the time; no try-outs, no auditions, just an ever so modest show of team spirit. Take Team Kanye or Team Tay Swift, for example. You can swear allegiance to one side or the other, but no one is expecting you to lift a finger to bring home that feud trophy. Former elementary school soccer champions that we are, that laissez-faire attitude towards teamwork doesn’t sit too well with us. And so, we’re counting on Swerve Fitness to Make Teams Great Again, one indoor cycling class at a time. And we think they’ve got this in the bag. Swerve incorporates both a team dynamic (officially our last chance at MVP greatness) and an individual one (if you’re more about that PR life) into their ride; and we find it pretty much unavoidable to work insanely hard in those 45 minutes.

We would say there is a relatively fine line between smart and complicated when it comes to fitness (equipment, metrics, and concepts, for that matter); while the former makes for top-notch experience, the latter can compromise a workout and cause frustration for anyone shy of supergenius Olympic athlete status. At first, we thought that Swerve teetered somewhere in between the two, since there was a ton of information thrown at us during our first few minutes of class. But persevere, people. Our instructor talked through the bike’s tech (gears = resistance, speed = BPMs, total output = Swerve Score), the format of the class (lots of races; seriously like 40 of them), and finally, the team situation rundown. It was a lot to process, and while our key takeaway was to be aggressive, b-e aggressive, it all started to make sense once class got underway (by the end of the first race, we were pros, though not our team leader; sigh).

Drafted to the Green, Blue or Red team (basically adult color war), every pedal stroke throughout class contributed to our overall team score. Crush sprints with your team, win points; Swerve (ride) to the beat with your team, win more points. During a single flat road or hill, there were 3-5 pushes, where we could see our team’s performance up on the board vs. our competition; and damn, did we ride fast and furious. Worth noting, personal performance is for your eyes only (unlike team scores and averages); so if you’re a beginner or having an off day, the screen’s not going to blow your spot.

Sure, we check out our personal Swerve Score during class, and felt great about breaking 550 during our last ride, though regulars have been known to crush 700+. And of course, we have every intention of topping our PR every time we clip in (exception: hangover rides). But Swerve is just as much about trying to take it home for the home team, and, somehow, anonymity does not relieve any sense of obligation to the squad. Whether our team is dominating a sprint (and we feel pressure to sustain the lead), or if we are trailing just slightly (and we feel pressure to kick things up a notch), we work harder in 45-minute Swerve ride than we do in maybe any other spin class, which is pretty f*cking noteworthy.

Gonna Cost You
$34/class (BOGO for newbies), and there are usually a handful of morning and mid-day spots up for grabs on ClassPass, but evening classes are harder to come by. Your spin shoe rental will be on the house, but plan to bring or buy agua.

Instructor Vibe
There is a lot going on during a Swerve ride, and therefore a lot for instructors to address throughout class. All in, this equates to a LOT of talking, from calling out ranges, prepping riders for the sprints to come, to egging on teams during a sprints (and dubbing the winners), to congratulating leaders. We’d recommend finding an instructor whose personality, vibe, and yes, voice, speaks to you, which should ensure all of that lip service is a turn on rather than the alternative.

Studio Sitch
Lockers, bathrooms, locker rooms with showers and products, smoothie bar (we endorse the pre-order move); gang’s all here. One thing to note, class takes place on the lower level of Swerve’s Flatiron studio, so we’d recommend putting on your cycling shoes post-descent to avoid eating it on the stairs.