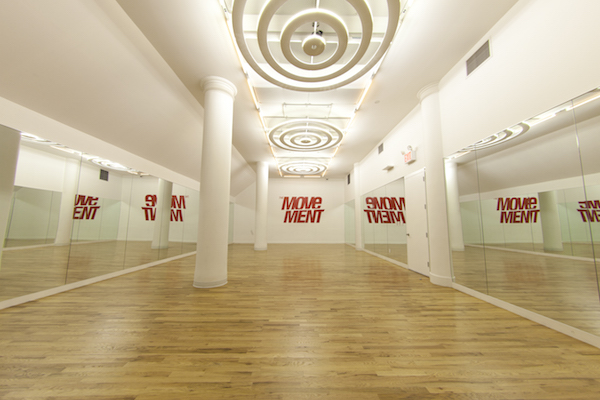 The Movement’s facade sure is lovely. We had peered into the window of this studio dozens of times while speed walking through Flatiron. Dazzled by the bright, welcoming entry, the fancy coconut water and the abundant swag available for purchase, we slowed our pace and thought, “Hey, we better get on this new spot that seems to be getting it all right.” Our first experience inside The Movement was enough to shatter that mirage. Past the front desk veneer, things got bleaker; we heard shouts emanating from various rooms as we walked the hall back to the lockers.Then it was time for our class to start, and sh*t got dark.

The Movement has a number of signature classes, from dance, to yoga to HIIT (high intensity interval training, for you acronym h8ers out there). We could either commend them for trying to do it all, or say they’re kind of all over the place. Our experience confirmed the latter. We bit on the “ReXist360 HIIT” class, described as a high intensity resistance training class, using these special patented resistance training bands, which we assumed must be life-changing, because why else patent them, and flaunt said patenting. Despite the 5-minute tutorial from our instructor at the beginning of class, it turns out it was a major b*tch to get these genius bands (with their 12 straps and 20 pieces of velcro) onto our bodies; so much so that we are now convinced that our bachelor’s degrees are worthless, and it’s clear that we are yet another failure of the United States education system. Getting these bands to stay on throughout class was equally arduous. Bottom line, we’re not sold what makes these so great versus regular resistance loops, and we’re sorry they probably spent time and good money patenting them.

Once workout #1 of getting the bands on was complete, workout #2 commenced. Our instructor, who we initially mistook for being soft-spoken (wrong, so wrong), barked us through various “pushes” and “sprints,” uttering primal screams of encouragement throughout the 45 minute class. We repeated combinations of lunges, skaters, squats,
burpees, squat jumps, high knees, mountain climbers on gliding discs (more equipment, yay!), hollowman holds and bicycle crunches – all familiar high intensity training moves, which we’re guessing the special band was supposed to elevate (it didn’t). Yes, that’s a lot of sh*t. Yes, we passed through most exercises too quickly to feel the effects. No, we could not tell the difference between pushes and sprints. No, it did not flow in a seamless or logical fashion. Oh, there was also a barre-like “toning” section for glutes and abs in the last 5 minutes of class, which came out of nowhere, and felt even more random than the rest of the disjointed workout.

If we sound borderline schizophrenic writing this, it’s because we’re trying to reflect the true nature of this experience. This workout was out of this world; but not in the way we wanted it to be. The Movement, transported us out of Flatiron and the 21st century to a dystopian future where boutique fitness studios neglect the art of a well-planned (and executed) class, and rely on unnecessarily complicated accessories that kill a workout, rather than make it killer.

Gonna Cost You
$26/class ($1 of which is donated to the National Brain Tumor Society), and they have lots of packages (and promos) that drive down that per class price. Water and such are for sale, too. Also worth noting, classes at The Movement are readily available on ClassPass, so we’d recommend that route if you feel compelled to try it.

Instructor Vibe
On top of an underwhelming playlist, half-baked explanations and demonstrations, our instructor didn’t have much personality. To be honest, she might have intended her screeching (well, we really go back and forth between barking and screeching) to be energizing and encouraging, but that got lost in translation to the human language. We could see a rockstar instructor improving The Movement experience, at least marginally, but we’re not up for scoping out the entire roster.

Studio Sitch
There are lockers, a bathroom and a changing room, but expect pretty tight quarters and being closer to more sweaty bodies than probably desired.