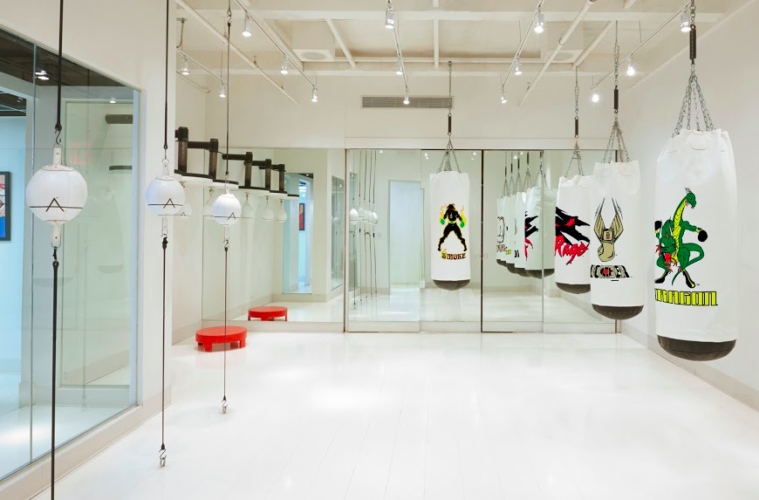 When it comes to fitness, food, and the finer things in life, we’re not one to pass up an opportunity to sample all of our options. A little of this, a little of that; figure out what works, what doesn’t; then nix the duds and go all in on the good sh*t. So, the fact that Aerospace High Performance Center wraps all three of its signature workouts – jump-roping, toning and boxing – into a single class for a prime testing-the-waters session earns them some respect in our book. Factor in our serious post-Aero3 soreness, and we can add admiration to our list of sentiments. Yet, Aerospace still misses the cut when it comes to fitness spots that we’d face hell and high water to frequent. And that’s because while the structure and efficacy of the workout were on point, the atmosphere was not, and ultimately dampened the overall experience.

We had scarcely set foot inside the studio when we picked up on a palpable, “can’t be bothered” vibe from our friend at the front desk, and we use the term friend very loosely here. About halfway through the class, the captain of the unwelcoming committee abandoned his front desk post to join in on the fun, which felt like a weird, somewhat sleazy move, and didn’t help our overall impression of Aerospace. But even worse, our instructor proved exceedingly apathetic, setting up his own equipment (there was a lot of it: a jumprope, gliding discs, 1-pound hand weights, resistance bands, a weighted bar) without a word to the room. At the eleventh hour, he helped a couple of people at random adjust their jump-ropes to appropriate lengths, and with a low mumble of his name, it was off to the races. Fortunately, once class was underway, the challenging exercises became a whole lot more absorbing than the instructor’s total indifference to our existence. Rather than draw a proverbial line in the sand between jump roping, shadowboxing and toning, our instructor cued short, rotating rounds of each, so we hit each format multiple times, which really kept us on our toes.

At a certain stage in adulthood, we assume that we have a solid grasp of our strengths (finishing full pizzas in a single sitting) and weaknesses (finishing full pizzas in a single sitting). But it took hitting up Aerospace to learn of our severe jump rope inadequacy, and we have a serious, newfound respect for the people who used to play double dutch on the playground instead of box ball. Each subsequent jump rope sequence was more complicated than the last (though we remained painfully remedial and probably beyond help, though can’t be sure since it wasn’t offered), incorporating high knees, skiers, front crosses, side crosses, and double unders. We were relieved to enter more familiar territory with the shadowboxing and sculpting rounds, hitting some jab-cross combos (holding weights and most notably a couple of sets with the resistance band, which was awesomely killer) as well as lunges, squats, mountain climbers and jumping jacks, often on the gliding discs (which meant constant core work along with whatever other muscles were the focus). What was most unique about Aerospace’s approach is the ambitious pace; we started off most exercises with a single count of the movement, and then hit double-time sets of two reps, then three, and then repeated the movement nonstop double-time. Not easy, and not not exhausting.

Along with deep appreciation for a well-utilized resistance band and anticipation of feeling the burn for days to come, we left Aerospace with a sense of regret that the experience isn’t as awesome as the workout itself. The energy was way off for us at Aerospace, and that’s the only reason we won’t be rushing back on a regular basis. But that’s just us. We like to feel welcomed, comfortable, acknowledged as a first-timer, inspired, motivated, corrected. But for someone who likes to do their thing, disappear into a class, and “can’t be bothered” with the instructor, the staff, or the vibe (anything beyond the finite fitness routine, really), Aerospace could be the perfect fit.

Instructor Vibe
Ever seen Bridesmaids? Remember the scene where Kristen Wiig and Maya Rudolph are participating in a bootcamp class in the park (from afar) and get chewed out by the instructor for pilfering the class? Well our instructor was about as encouraging as that dude. We could have been copying the exercises from afar, and gotten the same amount of attention and invigoration.

Studio Sitch
Aerospace isn’t super luxe, but it’s facilities do the trick. There are locker rooms (BYO lock though) with showers, and most things we needed to go from sweaty mess to presentable human.